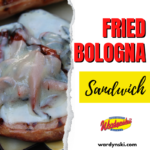 Sliced Wardynski bologna (could be thin or thick, to your taste) 1 cup peppers and onions, sliced Cheese of your choice Roll  Heat a frying pan over medium heat. Cut a slit in the middle of the slices of bologna and lay them in the frying pan. (Remember the slit or you will end up… Read more » 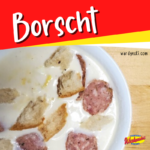 This is one of those family favorite recipes sent in by long time customer Ed Paragon that might be low on some specifics and amounts, but is always a crowd pleaser. Wardynski Smoked or Fresh Polish Sausage up to 3lbs 2 to 3 tbsp flour 32oz sour cream TOPPINGS Hard Boiled Eggs Rye Bread, torn… Read more »

A fun twist on fried bologna! Thinly sliced Wardynski bologna 1 cup peppers and onions, sliced Cheese of your choice Roll  Julienne the thin slices of bologna. Heat a frying pan over medium heat. Place the julienned pieces in the frying pan and fry to your taste of doneness. Add 1 tbsp of butter to… Read more »